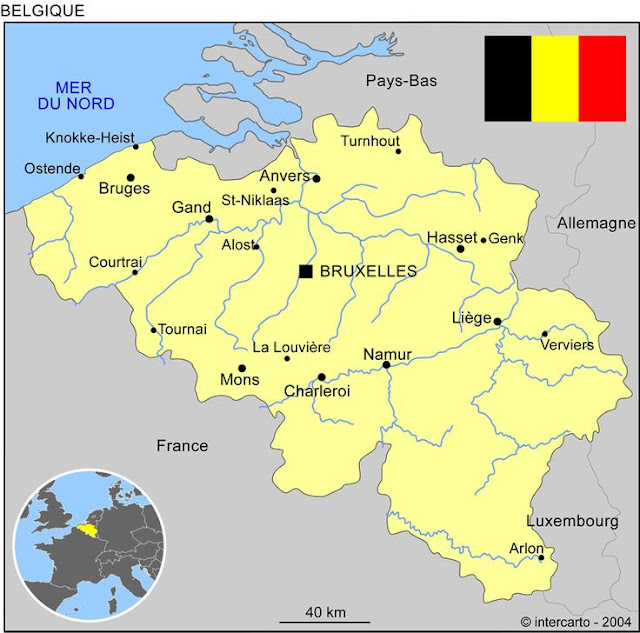 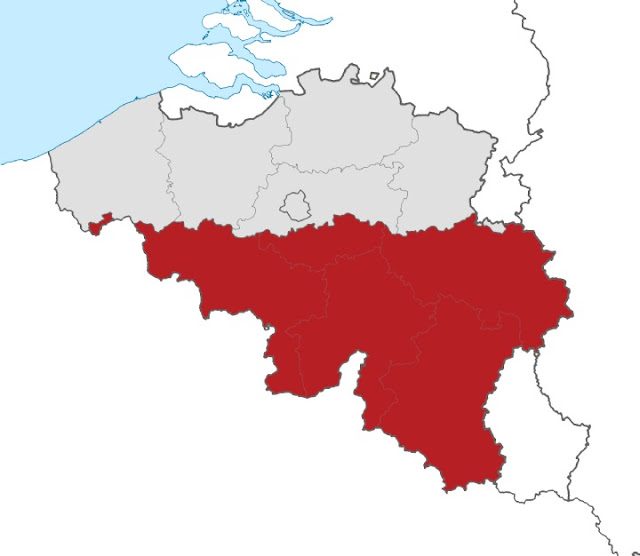 As is the case in so many other areas, viticulture Belgium is divided into two regions: Flanders (Dutch-speaking) and Walloon (French-speaking).

Haspengouw ( established in 1999) is located in the northeast of the country, in Limburg, between Hasselt, Sint-Truiden, Herk-de-Stad and Herstappe up to the border with Holland. The origins date back to the twelfth century. The soil is mainly sandy, with clay and limestone substrate. The grapes grown are Müller-Thurgau, Kerner, Siegerrebe, Pinot (white, gray, black and Meunier), Chardonnay, Riesling, Auxerrois, optima, ortega, Dornfelder, Wurzen, Bacchus and Merlot.

Heuvelland (established in 2000) is situated in the west, in the hills of Monteberg, Kemmelberg, Vidaigneberg, Rodeberg and Zwarteberg. Though mainly in the Flanders, a small part crosses over to Wallonia. The hills provide ideal draining slopes even if their altitude does not exceed 120 meters. Sandy soil is alternated with clay and rich in iron ore sandstone. The main vineyard are in Klijte, Dranouter, Kemmel, Loker, Nieuwkerke Reningelst, Westouter, Wijtschate and Wulvergem. Varietals admitted include: müller-thurgau, kerner, siegerrebe, pinot (black and gray), chardonnay, riesling, auxerrois, dornfelder, regent, cabernet sauvignon, johanniter and muscat.

Since 2005 there is a specific name for sparkling wines produced in Flanders with the traditional classic method: Vlaamse Mousserende Kwaliteitswijn (quality sparkling wine of Flanders). Maximum yield 80 hl per hectare. Permitted grapes: chardonnay, pinot (black, meunier, white, gray), auxerrois, riesling. It is a sector of wine production that is enjoying rapid growth. 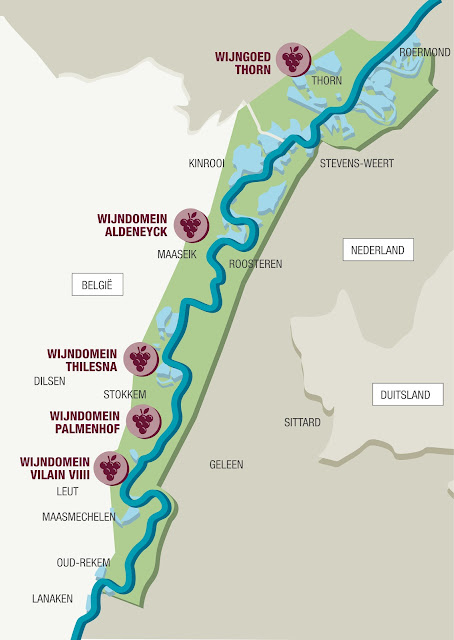 In 2017, the denominations of Maasvallei Limburg was approved. The area of ​​approximately 150 km² consists mainly of sand and gravel that was supplied over 400,000 years from the Alps, Jura, Vosges and the Ardennes. The mild microclimate, due to the lower area, ensures less rain and a longer growing season. Authorized grapes: Acolon, Auxerrois, Chardonnay, Dornfelder, Gewürztraminer, Pinot Blanc, Pinot Gris, Pinot Noir, Riesling and Siegerebe. (Thanks to Belgian Wines for the info).

Finally, there is a geographical indication for wines without designation of origin: Vlaamse Landwijn (loosely translatable as table wine of Flanders). The only requirement is that the must be made from grapes of vitis vinifera, or from hybrids between this and other species of the genus vitis.

In Wallonia there is one geographical designation: Côtes de Sambre et Meuse (2004), and another, Crémant de Vallonie (2008), for sparkling wines.

The production area of Côtes de Sambre et Meuse corresponds to the catchment area of the river Meuse, consisting in turn eight sub-basins: Meuse upstream and downstream, Sambre, Ourthe, Amblève, Semois, Chiers, Vesdre and Lesse. These areas correspond to the valleys between the two rivers Sambre and Meuse. The hills are very suitable for vines, with optimal slope for drainage and oriented to take advantage of the heat released by the water of the two rivers. The substrate consists of a thin layer of clay with silt, limestone and sand. There are around thirty winegrowers, for a total of about thirty hectares, about 80,000 plants and a production of one thousand hectoliters. The authorized grapes are auxerrois, bronner, chardonnay, chasselas, chenin, gamay, gewürztraminer, johanniter, madeleine of angevine, merlot, merzeling, müller-thurgau, muscat, ortega, various pinots (white, regent, riesling, gray and black) rivaner, seibel, siegerrebe and traminer.

Sparkling wines produced with the classic method have enjoyed rapid success and have demonstrated some of the best wine produced in Belgium. For the Crémant de Vallonie the varietals are Chardonnay and four pinot (black, white, meunier, gray). If a winemaker adds auxerrois or riesling the denomination becomes Vin mousseux de qualité de Wallonie (quality sparkling wine of Wallonia).

For the geographical indication Vins des Jardins de Vallonie (wine of the gardens of Wallonia, 2004) the rules are the same as for the Vlaamse landwijn.

For a brief history of wine in Belgium see another post in this blog.

NOTE: This post is an updated part of an article by Marco Carnovale which appeared in Italian in the issue n. 12 of the magazine Vitae, published by the Italian Sommelier Association (AIS).