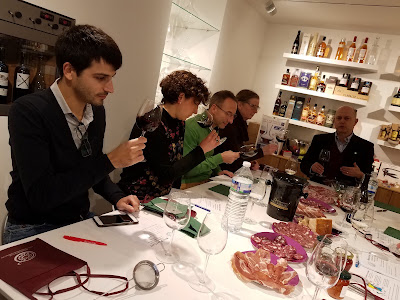 We met today at Eurowines in Brussels for a blind tasting of mature Barolo.

Thank you to Eric Daive, owner of Eurowines, for his hospitality in his first class shop in the Woluwe borough of Brussels. Do visit him for a wide choice of wine and spirits and friendly advice.

These bottles had been patiently waiting in the cellar for decades, slowly developing tertiary flavors, and today it was their day.

We tasted the wines blind, one by one, and scored them using the AIS system. Just so as not to make it too easy, two of the nine bottles were similarly aged Barbaresco, another noble wine from Piedmont made with the same grapes but in a different terroir. And two of the seven bottles of Barolos were identical: same producer, wine, vintage.

Overall, the Barolos were at, or very close to, their peak. A couple of them would have scored higher five years ago, but deciding when to open a bottle of Barolo is not an exact science. This tasting confirmed the incredible aging potential of this wine. 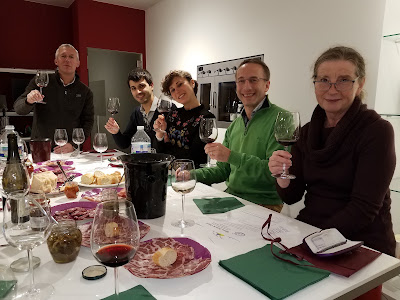 Or one could say of the nebbiolo variety: we added to the tasting a single bottle of Barbaresco, as a sort of control group. Sometimes considered the junior wine in the nebbiolo family of wines, this Barbaresco proved to be capable to take on all the Barolos and prevail.

The average score of today's wine was quite high, with five wines out of nine scoring above 90. This was perhaps not surprising given the high reputation of the lineup.

Only one of us correctly guessed which was the lone bottle of Barbaresco and none of us could tell which two bottles were the identical Scavino Barolo 94. The two bottles turned out to be very different indeed, even though they had been stored together for almost 20 years. 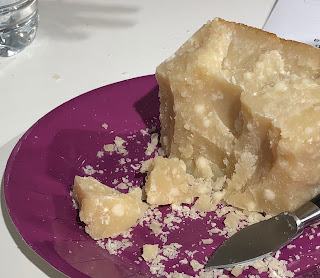 We paired the wines with a few Italian gastronomic specialties: Parmigiano cheese (aged 70 months!, none of us had ever tasted one this age), prosciutto and salami. Structured food for a structured wine. The delicacies provided by our sponsor Primitiae Italiae were a good complement for our tasting.

Preserved mushrooms, eggplant, olives, dried tomatoes and others, which matched well with the tannic Barolo and Barbaresco. You can read about their project and suggested recipes, as well as contact them to order their products on their website. 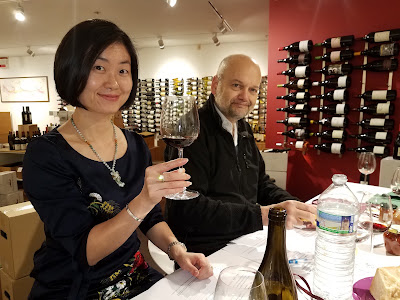 Individual wine notes, scores (average for the group), rank in our tasting and approximate market price (retail in late 2017 based on winesearcher.com data):

8. Barbaresco Valeirano Az. La Spinetta, 2004. Only one of us tasters tonight guessed correctly that this was the lone bottle of Barbaresco of the night. An exceptional, harmonious bottle, at its peak.  Score 95. Ranking today: 1/9. Price: Eur 105. The surprise winner today!

King of Italian wines, wine of Italian kings: beginnings in 1850s, same as Bordeaux, under initiative of Count Cavour and King Vittorio Emanuele II, before unification of Italy.

Grape: Nebbiolo 100%. Same as for Barbaresco, generic Nebbiolo, and a few others.

Etymology: from nebbia (fog) because grapes ripen late when the region experiences much fog. Also grapes covered with pruina, a grey fungus coating late in season.

Aging: min. 38 months, of which 18 in French or Slavonia oak barrels. Chestnut no longer used, too bitter. Riserva: 62 months, 18 in oak. New trend: aging in small oak barrels, smoothens indigenous tannins and acidity. Both styles of Barolo are in use today and the debate is still open as to which is best. In the end it is a matter of personal taste and luckily we consumers can have both!

Evolution: potential in the bottle of well over 25 years for the best wines.

Pairing: red meat, game, pasta/risotto with hearty sauces to contrast tannin. Cured cold cuts. Aged cheeses. Structured food to match structure of wine. At its peak of maturity it can be enjoyed by itself.

Final remarks: Barolo is a powerful yet elegant wine, with infinite complexity and long aging potential. It requires all of our attention to buy, to age in our cellar and to find a proper pairing, not least because it does not come cheap.