Tonight we met for one more session on the wines of Sicily.

This time it was conducted in English for a smaller group of our members.

Today's presentation on Sicilian wine is available in English here.

We blind-tasted a selection taken from the large number of wines we sampled last November at the Istituto Italiano di Cultura in Brussels.

This time we chose to focus on indigenous grapes. Sicily is known for a huge number of these, up to 100 including some historical ones now out of production, and therefore we inevitably had to make some painful choices.
Our plan is to complete this tasting with another one that will cover grapes and producers we did not have time to do justice to today.

For the whites we started with a Gaudensius, a traditional method bubbly made by Firriato with a creative and happy blend of chardonnay and catarratto.

A carricante by Planeta revealed the richness of the volcanic soil on the Etna.

Among the reds, for nero d'Avola, the most famous of Sicilian reds, we had a bottle of Hedonis by Feudo Arancio.

This was followed by nero d'Avola in its incarnation as a component, together with frappato, of the only DOCG of Sicily, the Cerasuolo di Vittoria, Sammauro by Nanfro.

Then perricone, an intriguing black grape which is unfortunately less popular today than it used to be and harder to find. We appreciated a Gibellina by Tenute Orestiadi.

Literally dulcis in fundo, we tasted the zibibbo passito by Firriato, Ecru, which was considered the most interesting wine of the evening by a consensus of all tasters tonight.

We also had a chance to try some pairing with Sicilian foods like arancini, cannoli and diversi tipi di crostini alle sarde e al pesto siciliano. 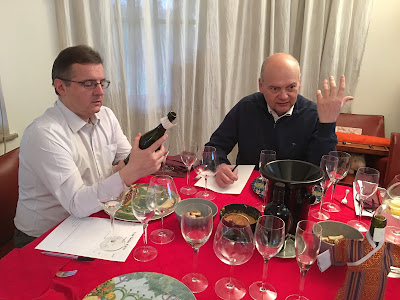 On behalf of the Associazione Italiana Sommelier our thanks to the following importers in Belgium:

And the following producers:

for their support of our Brussels club.