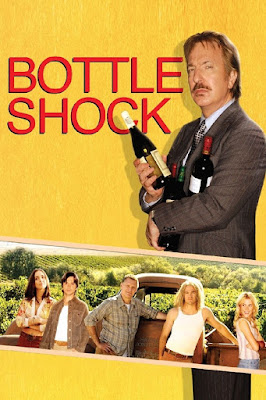 Synopsis
The build-up to the famous 1976 Judgement of Paris competition between French and Californian wines. Napa Valley's Jim Barrett (Lost Highway's Bill Pullman) has been plugging away for years with minimal success. A former attorney, Barrett runs Chateau Montelena with his wayward son, Bo (Chris Pine, the Star Trek prequel's Captain Kirk), who would rather do anything than assist his stern father. Bo's co-workers include Gustavo (Six Feet Under's Freddy Rodríguez) and Sam (Transformers' Rachael Taylor), who long to produce the perfect chardonnay.
Naturally, the young men compete for the favors of the beautiful blonde (the movie's least interesting angle). Across the Atlantic, Steven Spurrier (Alan Rickman) struggles to keep his Parisian wine shop going (cheapskate American Dennis Farina is his only regular customer). Then Spurrier conceives a contest to attract customers.


Review
While based on a true story, the film takes some liberty at embellishing the facts with romance and family feuds, but this does not detract from it being highly instructive for wine lovers.
The title is a pun: the "bottle shock" is what may ruin a wine because of vibrations and temperature variations during protracted and unprotected transportation. It is also the result of the tasting, which shocked the wine world for what a bottle of California wine was able to produce.

The competition itself should have been given more time in the movie in my view, as it was the event that justified making the movie in the first place and changed the world of wine ever since.

Also, the movie does not make it clear that the competition was only for a few varieties, ie Chardonnay and Cabernet Sauvignon/Merlot blends, and as such can in no way be interpreted to be an overall match between Californian and French wines.

Finally, one can not help but notice somewhat of a pro-Californian bias in the movie, but this is perhaps inevitable given the nature of the real historical events. I would like to see a film of the 2006 rematch, which California, again, won hands down, in fact by an even greater margin.
See the book "The Judgement of Paris" which I reviewed in my personal blog.
Posted by Marco Carnovale No comments: