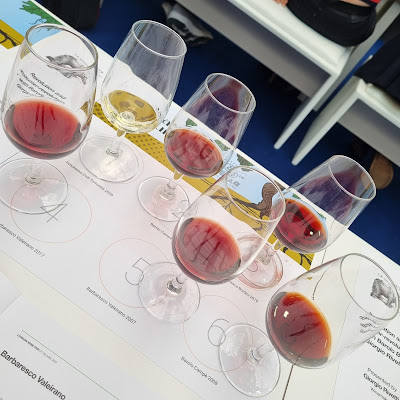 Wonderful master class organized by Enotria&Coe at the London Wine Fair 2022 to illustrate the wines of La Spinetta, on of the best producers in their portfolio.
La Spinetta started out producing moscato and it became so famous people would ask for a "spinetta" when ordering the famous piedmontese wine.
In 1995 they began using the "Gallina" vineyard to produce nebbiolo
Now all production is organic, back to tradition. Still uses horses to plow some of the fields like the family's grandfather used to do when he worked in Argentina in the 1950s.
Use green harvesting (prune up to 75% of bunches) to keep quality high
In 1980s most producers sold grapes to large companies, only a few began their own productions. In this they learned from the lessons of Burgundy.
Low yield of 4-6k bottles per hectare. 3k? Check
Giorgio Rivetti, featured in the Barolo Boys film, together with others, like Scavino, Sandrone, tried to make Barolo more likable, pleasant to more people and sooner, rather than the difficult wine requiring long aging of earlier times.
The iconic rhino on the label comes from a creation of German artist Dürer, who drew it without ever having seen a real rhino. For Giorgio Rivetti this was a symbol of how imagination can lead to results beyond expectations. It is in this vein that he started making Timorasso, a unique white variety in Piedmont.
The lion which is present on other labels is a symbol of royalty, as Barolo is considered "the king of wines and the wine of kings" after its early association with Vittorio Emanuele II, the founder of the modern Italian unitary state.
Tasting notes
Timorasso Colli Tortonesi 2020, timorasso 100%
Made from grapes picked from 25-year-old vines.
De-stemming and soft pressing, then fermentation in steel and rest on lees for eight months. Fresh and citrusy with lots of minerality, exalted by the absence of any oak. Mod length. The vineyard is in Tortona, hence the name. Spinetta suggests this wine can age a lot, up to 15 years, because of its acidity. Low yield, no more than 3,000 bottles per hectare (max allowed is 8,000).
Score 90
Barolo Campè 2018, nebbiolo 100%
Made from grapes picked from 70-year-old vines!
Maceration and fermentation in vats for 10 days, then malolactic in French oak, 20% new. Finally 24 months of aging before a further nine months in bottle. Intense aromas welcome the start of the tasting, and compex red fruit flavors make for a structured,  complex and long wine. Perfect balance, everything is in its right place, a harmonious wine.
Score 94
Barbaresco Bordini 2019, nebbiolo 100%
Old vines, average age 40 years.
Maceration and fermentation in vats for 14 days, malo in French oak then 16 months of aging.
An intense and powerful wine with prominent tannins, could use more time in the bottle.
Score 88
Barbaresco Valeirano 2017, nebbiolo 100%
Made from grapes picked from 55-year-old vines.
Complexity and power, yet a velvety elegance are the features of this wine. Still young, it will be perfect in 15 years, or longer. Small yield, less than one bottle per plant of vine.
Score 92
Barbaresco Valeirano 2007, nebbiolo 100%
Made from grapes picked from 55-year-old vines.
Back ten years from the previous wine and we have a perfectly mature vintage. Yeet it could wait a bit longer but it is marvelously ready now.
Score 96
Barolo Campè 2008
Made from grapes picked from 70-year-old vines!
An old master with nothing to prove, but past its prime, it would have been better to drink this a few years back.
Score 90