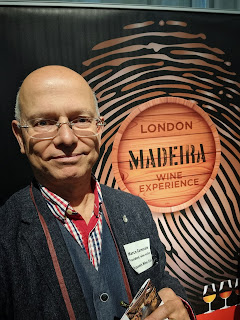 Thank you Westbury for organizing an intense "Madeira Wine Experience" today at London's Glazier's Hall. A walkaround of most of Madeira's producers (there are less than 10 anyway!) was enriched by three well-run masterclasses and the result was an intense day of exposure to this unique fortified wine.
I led a visit to Madeira with the Brussels Wine Club before, and was already familiar with most of the producers who participated today, but there is always something new to learn in the infinite diversity of madeira wines.
Especially useful was the provision of different kinds of food to match to madeira. While usually seen as an aperitif, or an accompaniment to dessert or cheese, madeira can actually be paired quite successfully with a variety of main courses from the cuisines of the world.
Below are my notes from some of the most notable tastings today. I mostly skipped the entry-level 5 and 10-year-old wines, not because they are not good, they often are. And can be great value. But I focused on the rarest bottles that might intrigue readers to spend a bit more in order to access a more unique drinking experience. Let us remember that the best madeira can age over a century, easily, as it is a very stable wine thanks to its unique process of controlled heating and slow oxidation. Looking forward to the next Westbury event on port wines in November.
Walkaround tasting

My first stop was at Blandy's, perhaps the most widely recognized label.
2009 Sercial, verdelho, boal and malvasia. Typical expressions of the four main varieties on the island, keep in mind that 2009 is a very very young vintage to drink in 2022.
The race horses for Blandy's today were the 1978 Terrantez and the 1972 Bual, just released this year after half a century of aging in barrels.
Terrantez provided a pleasant bitterness that comes from this rare grape variety. Score 89.
Bual (or Bual) was a magnificently smooth, balanced wine exuding nutty notes. Score 93
Next stop at Henriques & Henriques.
A 15yo was fresh with a touch of ripe apricots. Score 86.
Terrantez 20yo was also fresh but more complex. Score 92.
Sercial 2001 was superfresh, citrussy even, very elegant. Score 93.
Boal 2009 predictably smooth and toffee notes. Score 93
Malvasia 2001 sweet as expected, smooth and long. Score 93
This company remains a stable point of reference in Madeira for dependable quality. They now own six brands. Go visit them when on the island for a unique experience, you can also see coopers making canteiro barrels!
Next up was Justino's. A producer whose cellar I visited a few years ago and you can read my reviews here in this blog. Today We tasted four wines.
A 10yo sercial was surprisingly smooth. Score 90
A 1997 sercial surprised me with an intense nose and amazing freshness that did no damage to an overall balance. One of the best wines today. Score 96
A 10yo verdelho was an easy drink, sweeter than expected. Score 85
Final fireworks with a 50yo terrantez, still so fresh and structured, complex and long. Score 94
Barbeito was a new discovery for me as I had not had a chance to taste their wines before. The gem of their lineup today was a bottle of bastardo, a rare grape that is now almost extinct in Madeira. Known as Trousseau elsewhere, it is used for dry wines but its Madeira incarnation is a world apart from anything else.
Bastardo, considered medium dry, was rediscovered in 2004 by Teofile Cunha. The first harvest was in 2007 and it's been going skyward ever since. Barbeito offered a bottle of just 2184 produced in 1995 that was tingling and fresh, with lime notes. Yet balanced and long. Score 95 for a most rare opportunity to taste this grape.
A complex and long Tinta Negra (the humble grape from which by far most madeira wine is made) produced by the "canteiro" method in 2900 bottles in 2008 surprised me and all those who continue to exclude this grape from the list of "noble" varieties. Score 93
Finally, a malvasia candida 2006, produced in just 2366 bottles. A balanced, complex and moderately long wine. Score 92
Masterclass on Madeira pairing with food
As I mentioned earlier, madeira is too rarely thought of as a meal wine, but it is. Today we had a small sample of some successful pairings. Some, ahem, food for thought as we plan our meals with madeira wine.
A Blandy's sercial, the driest grape for madeira, was paired with a bite of cod on a salty spread of garlic conf, parsley and basil. The wine's acidity contrasted well with the creamy food.
Next, a Borges verdelho 15yo met its partner for the day in a slice of roast beef, again good contrast of medium dry wine with sweet tendency in the meat.
A Barbeito rainwater reserva, a tingling spicy wine, was well matched with smooth fried chicken. Usually, a classic pairing would be smooth wine and spicy food, but it worked very well the other way around here.
Henriques & Henriques offered a Finest medium dry that was paired with Hungarian beef stew. I would have preferred a drier madeira here but that's just my personal taste.
Justino's entry level semi-sweet Boal 10yo went hand in hand with sweet tendency pumpkin and blue cheese. Classical pairing by concordance of sweetness levels.
Finally Pereira's Malvasia 2000, the sweetest of the lineup, accompanied a ginger Jamaica cake with custard. In my view the cake was too sweet for this wine. Even though Malvasia is the sweetest madeira this bottle retained lots of acidity. 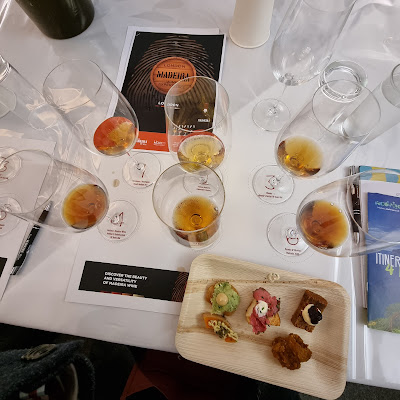 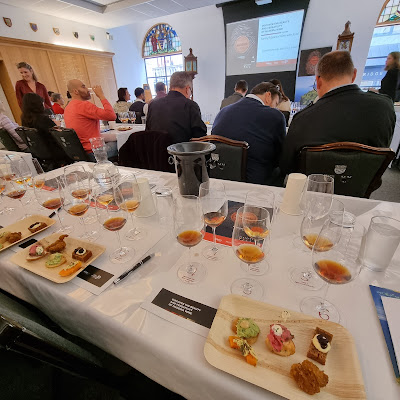