Master class
Unique master class led by Caroline Gilby MW and organized by WINEaBE at the iconic 67 Pall Mall club in London. When putting Romania and wine in the same sentence, most people think of inexpensive and mostly pinot noir. That was, to a first approximation, a fairly accurate depiction of reality until recent times. Below some of my notes from this event.
Today there is much more that that. The country hosts the fifth largest vine area in Europe (after Spain, France, Italy and Portugal), and ranks sixth in the continent for wine production (after the aforementioned four countries and Germany).
Romania might have ranked higher but it was hampered during the communist times in at least two ways: on the one hand, collectivization and government interference held back quality production, in viticulture as in so many other areas. On the other hand, in the context of the Comecon organization, Romania was not designated a wine producing country (as Hungary and Bulgaria were) and consequently every successive five-year plan neglected this sector.
When communism fell and private property was restored, the outlook began to improve, but for a long time producers preferred quantity over quality. This is now slowly changing. Diverse terroirs and climates, married to improved technology and know how, mean that this lesser known country is now projecting a new image of itself to the world.

Romanian producers are now catching up, wine makers from France and Italy are invited to transfer their knowledge, investment in machinery and wine education is rising. For example, more producers are now persuaded that it is necessary to pick grapes earlier and reduce yields to improve quality.
One problem is that winemakers don't exchange information among themselves, should do more to create a critical mass and raise the overall quality of Romanian wines.
Today's tasting is focussed on Feteasca Neagra, Romania's premier indigenous red grape. The name means "black girl" and it is believed to have originated somewhere near Iasi, near Moldavia. An ancient grape with no known parentage.
It produces full bodied wines with powerful tannins and is therefore well suited to aging. 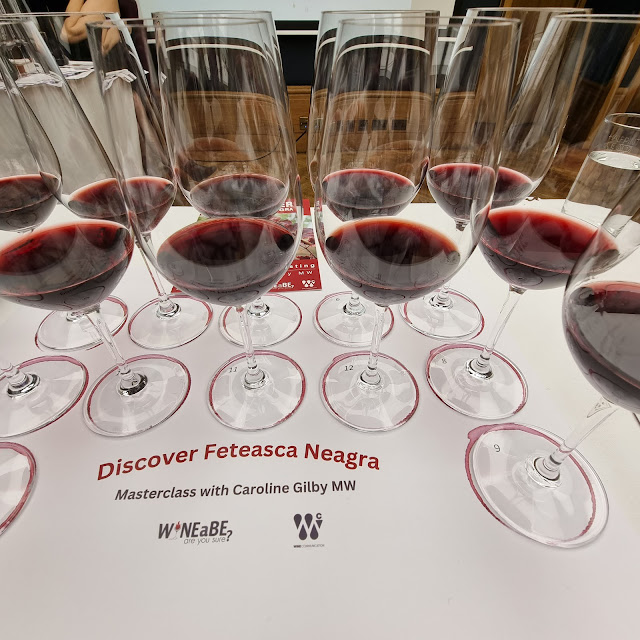 Tastings
We tasted twelve wines, all 100% feteasca neagra. Here is my shortlist of the best in the range.
Domeniul Bogdan, Murfatlar
Patrar 2019
This producer claims to be Romania's first biodynamic wine. It has been criticized by some at the tasting for using very heavy, environmentally unfriendly bottles. Started its production in 2011 and now grows grapes on 154 ha overall.
Fresh cherries with mod length and balance.
Score 87
Mosia Galicea Mare, Oltenia (no website found)
Elegance Feteasca Neagra 2018
Founded in 2016 in an old 1912 art nouveau building, and has some 70-year-old vines on its property, claimed to be the oldest in Romania. Adopted organic farming, no additions at all except some sulphites.
Mod complex wine with excellent balance and elegance.
Score 89
Sandridge 2018
Dagon, Dealu Mare
Forty-year-old vines and spontaneous fermentation for this complex and balanced wine with good aging potential. Expensive at RRP £50 in the UK.
Score 91
Viile Budureasca, Dealu Mare
Feteasca neagra origini 2018
This large winery (over 3.5m bottles annually) was founded in 2013 and works in cooperation with British winemaker Stephen Donnelly.
Ripe cherries, chocolate, a bit on the smooth side because of a bit much residual sugar and the use of  American oak.
Score 89
Serve, Dealu Mare
Guy de Poix 2015
A velvety smooth wine, perfectly balanced and long. Chocolate and ripe cherries, drink now no need to wait! The best of today
Score 92