I confess I did not know much about Lirac until today. In fact, I am not sure I remember the last time I tasted a glass from this hidden gem, a real secret in the vast panorama of wines from the warmer regions of southern France.
So I was ecstatic to accept a gracious invitation by the UK Sommelier Association to participate in a masterclass organized in cooperation with Cru des Côtes du Rhône and led by well known wine blogger Jamie Goode. Here below what we learned today, followed by my tasting notes.

Some numbers to keep in mind: In 2020 87% Lirac's production was red, 10% white and 3% rosé. The average annual yield is 24 hl for each of the 818 hectares in the whole Lirac AOC which lies immediately to the west of the Rhone river, just across the water from the famous Chateauneuf du Pape. Just over 20,000 liters produced, with some 40% exported.

Winemaking in Lirac goes back hundreds of years, and when the pope set up court in nearby Avignon in the XIV century they apparently appreciated it already! Closer to our days, it was in 1947 that the Lirac AOC (appellation d'origine contrôlée) was created as a cru of the Rhone Valley.

The climate benefits from a strong Mediterranean influence (2700 hours of sunshine per year) even if the sea is nowhere to be seen in Lirac. 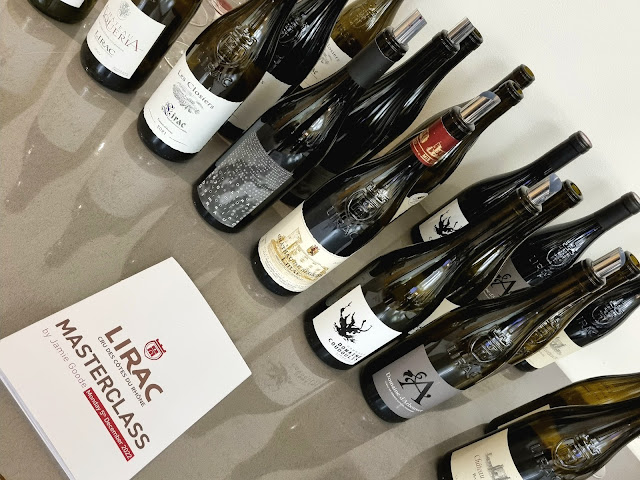 Here below my tasting notes. All these wines are, in my opinion, ready now but the top of the range at the end of the tasting might benefit for a couple of extra years in the bottle.
Domaine des Maravilhas, Pradau 2019
Bourboulenc, Grenache blanc, 12.5%abv, 35+yo vines
Wild fermentation, 18mos in concrete and 12% in small oak
Fresh and fruity with pronounced minerality. RRO £ 12
Score 87
Château d'Aqueria 2021
Grenache blanc, bourboulenc et al for a stunning 14%abv
Balanced, notes of mint and almond, with a pleasant bitter end. RRP £ 11
Score 89
Les Closiers Lirac 2021
Grenache noir, syrah, mourvedre, 14%abv
Own label by M&S, liquorice, aniseed, moderate balance. RRP £ 11
Score 85
Domaine Giraud, Les Sables d'Arène 2021
Grenache, syrah, mourvedre, 15%abv
Organic production for a plump fruity wine with a pronounced sensation of pseudo-warmth given by the high abv. Old vines. RRP £ 17.50
Château de Ségriès 2018
Grenache, syrah, cinsault, mourvedre, 14.5%abv
A "new world" sort of wine: lush and exuding tons of ripe fruit, complex with round tannins. RRP £ 21
Score 92
Domaine dArbousset - La Vigne d'Yvon 2017
Grenache, syrah, mourvedre, cinsault, 15% abv
A balanced, jammy wine with moderate length. RRP £ 12.85
Score 88
Château de Montfaucon - Baron Louis 2016
Grenache, syrah, carignan, cinsault, mourvedre
Pepper and earthy aromas, balanced and mod long. RRP £ 16.27 (cute RRP)
Score 90
In conclusion: is Lirac another Châteauneuf du pape? Yes and no. Jamie said it could be: same grapes, same climate, same soil. Yet you probably won't find the world class bottles that one can buy on the other side of the river. Can you get excellent quality for your money? Definitely yes. If quality continues to improve, I would not be surprised that prices would rise substantially from current levels and begin to close the gap with their bigger brothers we all know.